A Fantasy author in the Twin Cities 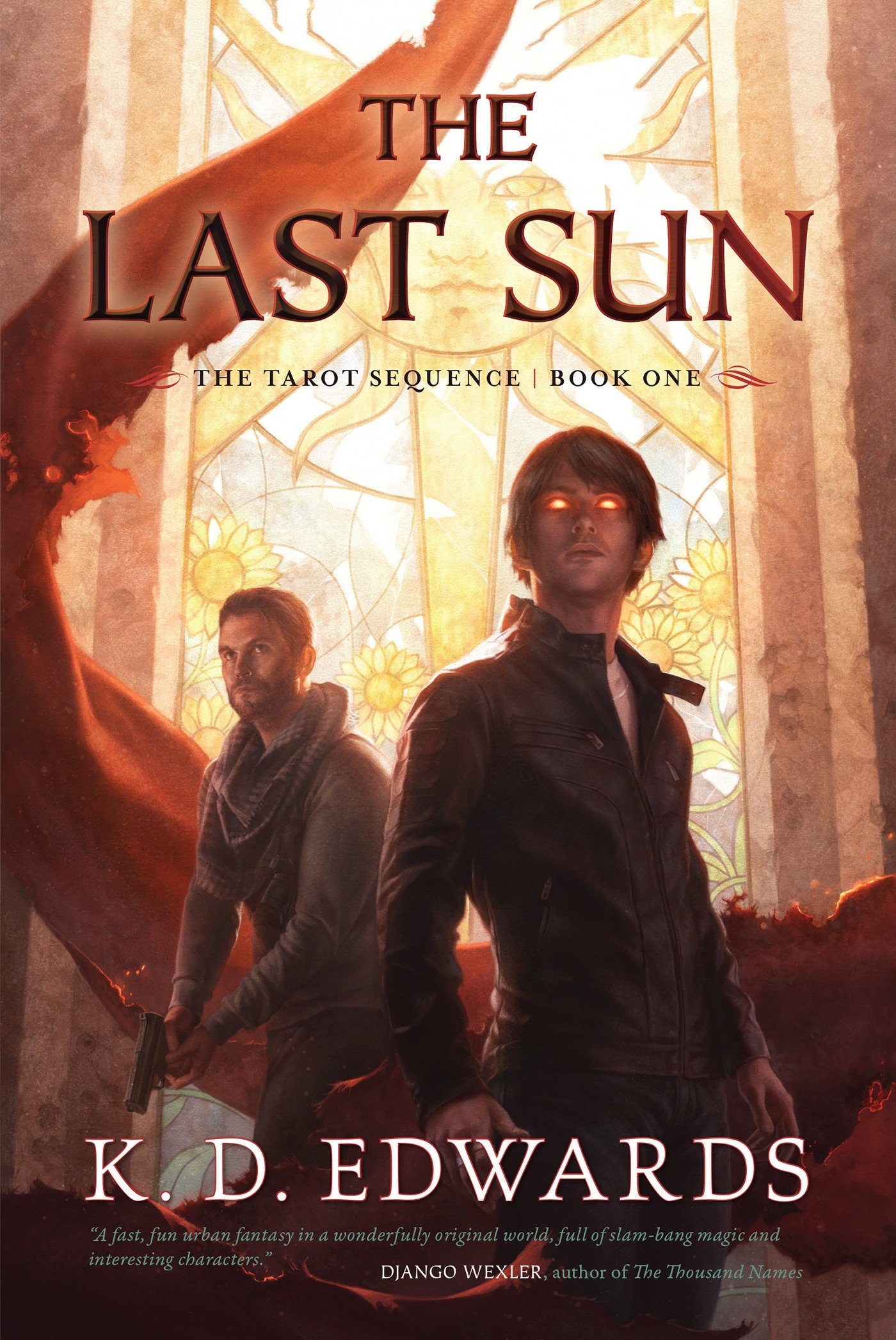 I won The Last Sun by K D Edwards in the same Twitter contest where I got The Glamour Thieves.  After the sexiness of The Glamour Thieves and this being another urban fantasy, I was expecting a similar heat level. That was not the case. I liked the book overall, but I’m also not entirely sure what to make of it.  Let me break it down for you.

I loved the banter in this.  Love, love, love. The snark of the main character, the interplay of him with his teammates, the careful political phrasing, it was all wonderful. I appreciated that at the first opportunity, the main character took it upon himself to correct some misconceptions within his team. He communicated the issue he was having with his love interest, and said interest listened and backed off. Overall, it was great to see adults actually talking about their problems, even with the standard “I have been traumatized and don’t want to talk about my issues” going on.

I immediately liked the main character. Rune is exactly the sort of snarky violent asshole that really appeals to me. And he is protective of his people and those who need his help in a way that makes him super sympathetic.

The story seems to be set in a World of Bi, which I immediately adore. All of the flirting and romance is M/M, which is a little weird for a World of Bi, but I’m fine with M/M romance so I’m not complaining. Honestly, though, the whole story felt a bit like a sausage fest. The only female characters were bit players.

I liked Addam as a character. He is a super sweet love interest and has the best line in the whole novel (“I needed this to be the memory you remember, from tonight”).  I think it’s adorable that he calls the Rune “Hero.”  But honestly, he doesn’t seem well matched to Rune. He’s too bright and positive for our violent protagonist, which makes me think this is a relationship that can only end badly. And, I have to admit, he’s not the person I was expecting or hoping would be the love interest. (I wanted that to be Rune’s Companion, Brand, since that is literally the same set-up I have in my novel, down to “Companion” as a capitalized phrasing.)  Despite that, he is a cinnamon roll and I love him.

The plot was quick and immediately drew me in. All solid there. Except for the first chapter, interestingly, which I kept expecting to connect to the plot but really seemed to be just introduction to the world and characters. (In looking at the preview for the sequel, it seems to be a set-up to that, so it may well be related to a larger story arc.)

The world, however…  I just don’t really buy it. The names of these theoretically non-human people (I think? Humans are used both as an Other and as an Us, so I genuinely have no idea if the Atlanteans are human, which is another worldbuilding problem) are extremely Christian, they all use Christian swears and the Tarot the courts are based off of are all the classic medieval ones (so again, Christian). Now, that’s all fine (if not what I enjoy in my Fantasy).  But then the people call themselves Atlanteans. They’re supposed to be modern refugees from Atlantis.

The destruction of Atlantic was recounted as a mythic/historical event in Plato’s time.  That’s way pre-Christian.

If you shut your brain off, the internal consistency of the world mostly works. But the Atlantean/Tarot aspect really didn’t work for me, and it was pulling me out of the story the whole time.

Now that ‘mostly‘. What does it mean to say someone is “almost pure-blooded fae” after you just killed the rest of their family? Does that mean the grandmother you just confronted was also part fae? Are fae different from Atlanteans? Are Atlanteans human? Why does that question only get more confusing the further the novel continues? The questions continue…

And finally we get to the trigger warning of this post.

Rune’s rape as a teenager gets referenced a lot in this book. Definitely more so than I was expecting. Now, the author doesn’t spring it on you. It’s referenced obliquely in the prologue, comes up in increasingly direct methods as the story goes on, until in the end we get first a flashback to it and then one of the rapists taunting Rune with what he did to him. It’s taken seriously at all times and the horror and damage of what was done to him doesn’t get downplayed. But it is still really rough reading those parts and I would not recommend it if that is one of your triggers.  It’s also strongly implied that a child Rune adopts in the first chapter was sexually abused by his family for years. (The plot of the sequel seems to focus on that child and potential forced marriage/sexual slavery, so clearly this topic is not going away.)

Overall, I did enjoy this book. It was a lot of fun.  I’d be interested in reading the next one because I want to see Rune grow and claim his power and see what happens with Addam. (Also, I totally ship Max and Quinn and want that to be a thing.)  I would not, however, recommend it to people for whom rape and sexual violence are triggers.